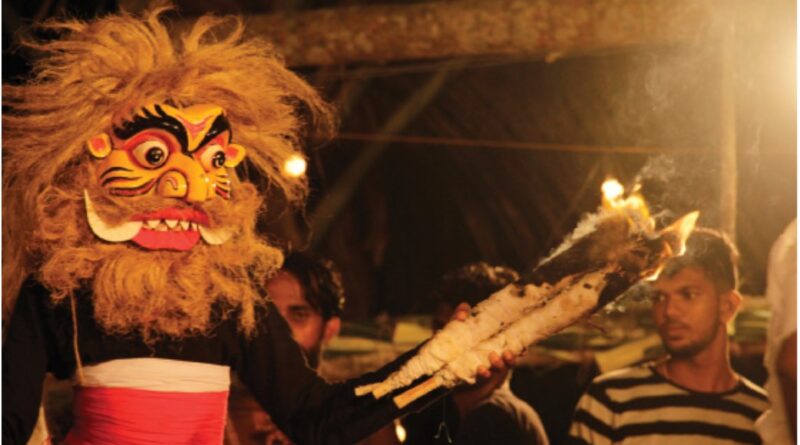 Dance therapy or dance/movement therapy (DMT) in the modern sense is relatively new to Sri Lanka. Recently, there has been an interest in establishing it as a profession on the island. As DMT is in the very early stages in the country, I see the different directions that it can take. As a dancer, dance educator, and researcher, I see the importance and the potential of healing aspects of dance and movements. However, as an emerging discipline, I demonstrate that at least three directions that DMT in Sri Lanka could take—colonial, nationalized, and decolonial. My premise is that DMT becomes colonial, given its history and orientation, when it is introduced to a postcolonial site. As I argue, DMT imposes a particular colonial framework when introduced to a postcolonial site like Sri Lanka. At the same time, some try to frame DMT in an ethno-nationalist discourse by attempting to prove that dance therapy has already existed in Sinhala traditional ritual practices. Focusing on Sri Lanka, this article questions these colonial and nationalized approaches in DMT and suggests that a decolonial approach is possible.

After receiving an undergraduate degree in fine arts from Sri Lanka, I was looking for ways to incorporate my passion for dance with academic studies in a new direction. I was attracted to dance therapy and was almost admitted into a graduate program in that discipline. Although I did not do my PhD in dance therapy, I had been exposed to various aspects of dance/movement therapy (DMT) and healing practices in the past. Between 2004 and 2020, I engaged in research projects on dance, performance, and therapy with various North American scholars. I invited some of them to Sri Lanka and collaborated with them, and I incorporated elements of the healing aspects of dance into the curriculum of the program where I currently teach. Through my experiences, I was exposed to the benefits of DMT, and, at the same time, was able to be more critical of the use of these practices in postcolonial sites such as Sri Lanka. Now in 2021, while seeing the benefits that dance therapy can offer to Sri Lankans, I also see the potential danger if it goes in some problematic directions.

Since DMT in the modern sense is relatively new to Sri Lanka, there are different directions that it can take. I demonstrate here three of these potential directions: colonial, nationalized, and decolonial. DMT becomes colonial, given its history and orientation, when it is introduced to a postcolonial site. However, an ethno-nationalist approach that tries to prove that such a thing existed in precolonial, traditional Sinhala rituals is also not helpful. In this article, I question both the colonial and the nationalized approaches in DMT in Sri Lanka and suggest that a decolonial approach is possible.

Currently, there is no single decolonial framework that can be universally agreed upon (and maybe there will never be). When I use the term decolonizing here, I am in agreement with the Puerto Rican thinker and scholar Ramon Grosfoguel. Like Grosfoguel, I use the term coloniality to mark the “colonial situations”—“the cultural, political, sexual, spiritual, epistemic and economic oppression/exploitation of subordinate racialized/ethnic groups by dominant racialized/ethnic groups with or without the existence of colonial administrations” (Grosfoguel, 2007, p. 220). DMT in Sri Lanka creates colonial situations. I agree with Grosfoguel when he articulates decolonization as “not an essentialist, fundamentalist, anti-European critique,” but a “perspective that is critical of both Eurocentric and Third World fundamentalisms, colonialism and nationalism” (Grosfoguel, 2007, p. 212). Decolonization involves addressing hierarchies of “racial, ethnic, sexual, gender, and economic relations” between the colonized and the Eurocentric knowledge structures (Grosfoguel, 2003, pp. 18–19). Therefore, the first step toward decolonization is to characterize the hierarchies and oppressive elements that stem from coloniality, even in postcolonial conditions. My critique of DMT does not end in coloniality. While critiquing the coloniality in DMT, I also question the attempts to nationalize it by glorifying the precolonial past.

In ancient societies, various performance elements were used for healing through festivals, ceremonies and various rituals. Dance, movement, music, storytelling, and roleplaying have been used for healing purposes for many ages. However, it is only after the 20th century that those healing practices have been framed more professionally as “therapy” in the Global North. DMT is a relatively new discipline and is a profession developed mainly in the USA initially, in the period since the 1940s.

The use of creative arts in a professional therapeutic manner is relatively new to Sri Lanka. As drama therapist Tehani Chitty asserts, although traditional healing ritual practice existed in Sri Lanka, “it has now been formulated by the Western strain of psychology as well, which allows us to use it more explicitly as a form of therapy” (Dawoodbhoy, 2019). Among other creative art therapies, DMT is the newest for Sri Lanka, and individuals have begun to use it in a very loose manner over the last 15 years. This includes the work that Venuri Perera, I, and others have been doing, separately, in using dance for individual and community well-being. For example, in 2009, when I was working with former child soldiers of the Liberation Tigers of Tamil Eelam (LTTE), I used dance in workshops that promoted national integration. We were not doing this kind of work in a therapeutic framework, yet there is currently an interest among individuals in Sri Lanka (both foreign and local) in developing DMT as a profession and to have a licensing system as in the USA.

Since Sri Lanka has a rich tradition of performing arts, therapists and researchers working with creative art therapies turn to traditional dance and rituals. Most of them are attracted to the low country dance tradition (or Ruhunu dance), which is primarily practiced in the western and southern parts of the island. Yet this move to working with low country dance traditions has a colonial legacy. Colonial writers have characterized this low country tradition as a ritual dance tradition dealing with demons, devils, and spirits. The colonial discourse of black magic, shamanism and exorcism has schematized this tradition as a devil or demon dance tradition, and later researchers have also characterized these ritual dances as devil or demon dance practices. This discourse of devils, demons, and exorcism has helped drama and dance therapists to find their tools and to articulate them into therapeutic practices. The therapists are not, however, attracted to Kandyan dance, the most popular dance tradition in Sri Lanka. Kandyan dance has been elevated as the national dance, and it is used for the national pride of the Sinhala, the majority ethnic group in the country. Its repertoires are generally refined and difficult to tweak for therapeutic purposes because of cultural and political reasons. The therapists do not seem to be attracted to the Tamil dance traditions in the country, and since I am more familiar with the dance traditions of the Sinhala people in Sri Lanka, I am focusing only on those in this article.