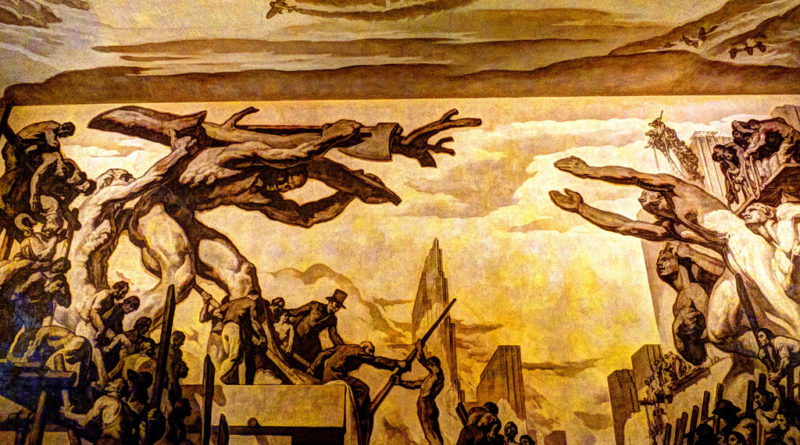 Tony Yu Zhou, Inspirees Institute, China
(The full version of this article is published on Vol 6, Issue 1, 2020 in Covid-19 special issue of CAET)

With the outbreak of the coronavirus epidemic in China and spreading out to the world, the public and academics have been discussing the attack of this “new type” of virus on human species and how we can react at biological, social, and economic levels in order to go through this crisis, which started in the late 2019. Yet, examining this issue from different and macro perspectives, we can consider the virus to be acting as the messenger among art and science, human beings, and nature.

So much has been clarified about coronaviruses and other viruses in biology. Viruses are tiny infectious agents that replicate only inside the living cells of an organism, and they have been described as the “miracle biomolecules at the edge of life” (i.e., between life form and non-life form) (Koonin & Starokadomskyy, 2016). Viruses can infect all types of life forms, from animals and plants to microorganisms. They are considered as non-organisms since they cannot survive outside the host systems they infect. However, such interpretation of viruses based on its dependence on hosts is rather subjective and biased. As the matter of fact, nearly all living forms or organisms are dependent on their living environment and other surrounding systems and processes to provide raw materials or energy (photosynthesis etc.), without which they cannot survive independently. Hence, although human beings are considered the organism, we can also be classified as “parasites/viruses” within some other systems.

According to thermodynamic theory and research work from Nobel-laureate physicist Erwin Schrödinger and Austrian physicist Ludwig Boltzmann, the general struggle for existence of animate beings is not a struggle for raw materials—these, for organisms, are air, water, and soil, all abundantly available—nor for energy that exists in plenty in anybody in the form of heat, but is a struggle for [negative] entropy (Boltzmann, 1974). Entropy is the quantitative measure of the degree of disorder in any physical system. This means that any life form, whether viruses or human beings, regardless its complexity, needs to create lots of chaos (disorders) in the environment to gain negative entropy in order to build and stabilize itself. Any changes in biodiversity that lead to lower entropy production would be considered detrimental to system stability (Vallino, 2010). Unfortunately, this means human beings or society, on its way to evolve into a highly structured and complex entity, needs to disrupt the surrounding nature and other living system/species including viruses. Thus, it makes sense to consider the coronavirus epidemic in China as a good example of such interaction among different systems: human species release lots of disorders (entropy) to the environment, the virus feels the pressure and reacts by creating chaos to human beings with such a disease in order to stabilize themselves as a system and survive. Ideas about the relationship between entropy and living organisms have inspired hypotheses in many contexts, including psychology, sociology, information theory, the origin of life, and the possibility of extraterrestrial life.

Back to viruses, this simplest form of organisms is very creative (i.e., highly robust to mutate its gene very quick to counteract the medicines produced by human beings). By comparison, the highly evolved and structured human species is much less flexible to adapting to the gene mutation of the virus and thus became vulnerable to the attack of the coronavirus in this case. If we recall the HIV cocktail therapy (Gulick et al., 1997) invented by the Taiwanese-American scientist David Ho, who was inspired by traditional Chinese medicine and the yin-yang philosophy, it appears that the ancient Chinese wisdom of creating entropy/chaos in herb soup was applied in the said HIV cocktail therapy, which responds to the quick mutations of the malignant virus, whereas Western medicine, when used as a single active chemical component, albeit analytically clear and “correct,” sometimes has limitation in fighting viral infections and mutations effectively. Apparently, highly structured entities like human beings have pitfalls, and for the sake of survival as a species or system, it is desirable to have some corresponding entities that are creative and less structured such as art in order to achieve balance and robustness.

I remember the first time I visited the Rockefeller Center in New York. I stood in front of the fresco art (Figures 1 and 2), and I felt overwhelmed and was taken back. The attempt and ambition of human beings to conquer the world and control the nature conveyed by the paintings impressed and intimidated me at the same time. This was intensified by the scale of the artworks, the strong contrast of colors, and the predominant presence of human beings in the paintings, which I hardly saw in the Chinese counterpart. From a biologist’s and human being’s point of view, I understood our desire to be in the center of the nature, but being someone from a traditional Chinese culture background with reverence to nature, I felt it was such a bold statement to challenge Mother Nature. This coronavirus epidemic strongly reminded me, a biomedical scientist, an arts therapist, and a human being, of how little we know about the universe and how vulnerable we actually can be in the face of such a small and simple biomolecule and living form, reinforcing my respect for nature and understanding of Way (Tao). Nature seems to send coronavirus as a messenger, informing us how we need to think more ecologically and to be less egoistic as an individual and species. Although I see the value of the fighting (yang) quality, such as being stronger, bigger, and faster, as driven by the modern civilization, it is sensible to realize that the opposite yin quality, being gentle, smaller, slower, etc., can be also powerful. Many times in my life, I was moved by art, and I remember it was the gentle and elegant music and dance and essentially the feeling of deep connection to nature and other human beings that touched my nerves and brought tears to my eyes. That was the moment my mind, heart, and spirits aligned, and I felt electrified and enlightened. That was the moment I felt I was a true human being.

Richard Oliver (1999), in his book The Coming Biotech Age: The Business of Bio-Materials, demonstrated the evolution curve of human civilizations in the past thousands of years through the Agricultural Revolution, Industrial Age, Information Age, and Bio-material Age. The accelerating growth curve appears to be very similar to those of bacteria and virus. This again shows that, at certain dimensions, we, as the living systems, are all connected and exist and develop in a similar pattern. Human beings, as a system, need to learn to achieve the delicate balance of producing entropy (disorders) to stabilize itself and not destroy other surrounding systems. According to Vallino (2010), bio-systems that produce more entropy over longer time periods is favorable in the Darwinian context of natural selection. He speculates that systems will evolve toward entropy production that is maximized over infinite time and space. Probably, that is the pathway that human species should choose in order to exist longer.

Tony Y. Zhou, PhD, is the founder and director of Inspirees Institute, China/Netherlands. He is also the founder and executive editor of CAET. He was trained as the biomedical scientist and later received training in dance/movement therapy and is the first certified Laban movement analyst in mainland China. He cofounded International Association of Creative Arts Somatic Education in 2019. ORCID:0000-0001-8099-6458.