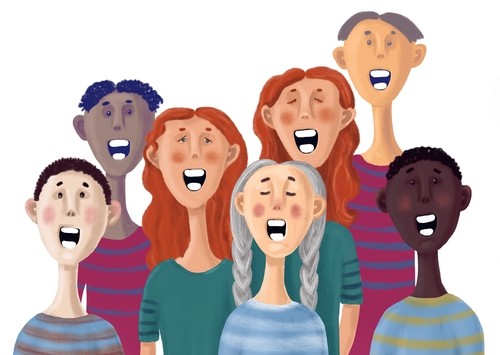 The idea that group singing is good for wellbeing and health goes back to at least the late 16th century. The English composer William Byrd (Byrd, 1588) claimed, that singing is good for health, strengthens the muscles of the chest, improves breathing, and helps with voice problems including stammering.

However, it is only in the last 20 years that these insights have been subject to scientific scrutiny. In 2001, with my colleague Grenville Hancox (Clift & Hancox, 2001), I published findings from two simple surveys of members of a University Choral Society. This small study has been cited over 400 times in subsequent studies of singing and wellbeing, and the findings have stood the test of time.

We identified over 30 distinct benefits described by singers, which defined six broad dimensions. The most substantial dimension related to feelings of well-being and relaxation, followed by benefits for breathing and posture, social benefits, spiritual benefits, emotional impacts, and a final dimension related to exercising the heart, increased oxygen and improved immune function.

These findings showed that singers experienced different kinds of benefits from singing and experienced them to different degrees. The dimensions emerged because of variations in whether singers agreed, were unsure, or disagreed with the component items. For well-being and relaxation, breathing and posture and social benefits dimensions most singers ‘strongly agreed’ or ‘agreed’ about these benefits.  For spiritual benefits, emotional impacts and heart and immune function, in contrast, more singers were ‘unsure’ or ‘disagreed’ about such benefits.

Following the establishment of the De Haan Centre in 2005, we replicated the preliminary survey in a study of over 1,000 choral singers in 21 choirs in Australia, England, and Germany (Clift et al., 2009, 2010, 2012; Clift and Hancox, 2010; Livesey et al., 2012).  We found that choir members who faced challenges to their mental health were more likely to strongly endorse the supportive value of singing.  These included people who had:

It appeared, therefore, that participants with mental or physical health problems used choir membership and singing as a therapy or an aid to rehabilitation.

All of these studies revealed improvements in mental health and wellbeing, disease specific quality of life, and improved day to day self-management of chronic breathing difficulties.

Our most significant achievement was running the world’s first randomized controlled trial on community singing for older people (Coulton et al., 2015).  This showed that weekly singing over three months significantly improved mental health related quality of life. These benefits were maintained for a further three months after the singing programme ended.

I want to end with recent examples of research, which have explored ideas expressed in the 2001 paper, but not directly investigated by the De Haan Centre.

(This is the speech of Dr. Clift on IACAET Global webinar: The Intersection between the Arts in Education, Health, Community and Therapy in International contexts: Tradition, Innovation and Breakthroughs. This talk is based on: Clift, S. (2020) Choirs and singing.  In Crawford, P., Brown, B. and Charise, A. (Eds.) The Routledge Companion to Health Humanities. London: Routledge.  See also videos produced by the De Haan Centre to illustrate its work)

Clift, S. and Hancox, G. (2001) The perceived benefits of singing: Findings from preliminary surveys with a university college choral society.  Journal of the Royal Society for the Promotion of Health, 121, 4, 248-256.

Clift, S. and Hancox, G. (2010) The significance of choral singing for sustaining psychological wellbeing: Findings from a survey of choristers in England, Australia and Germany, Music Performance Research, 3, 1, 79-96.

Clift, S., Hancox, G., Morrison, I.,Hess, B., et al. (2009) What do singers say about the effects of choral singing on physical health? Findings from a survey of choristers in Australia, England and Germany. In J. Louhivuoiri, Eerole, T., Saarikallio, S., Himberg, T. and Eerola, P-S. (Eds.) Proceedings of the 7th Triennial Conference of European Society for the Cognitive Sciences of Music (ESCOM 2009), Jyvaskkyla, Finland.

Clift, S., Morrison, I. and Hancox, G. (2012) Singing, wellbeing and gender: Findings from a survey of choristers in Australia, England and Germany, In Harrison, S. and  Welch, G. (Eds.) Perspectives on Males and Singing, Dordretch: Springer.

Unadkat, S., Camic, P.M. and Vella-Burrows, T. (2017) Understanding the experience of group singing for couples where one partner has a diagnosis of dementia. The Gerontologist, 57, 3, 69-478.